Angela Merkel calls on Germans to avoid “Christmas with grandparents” 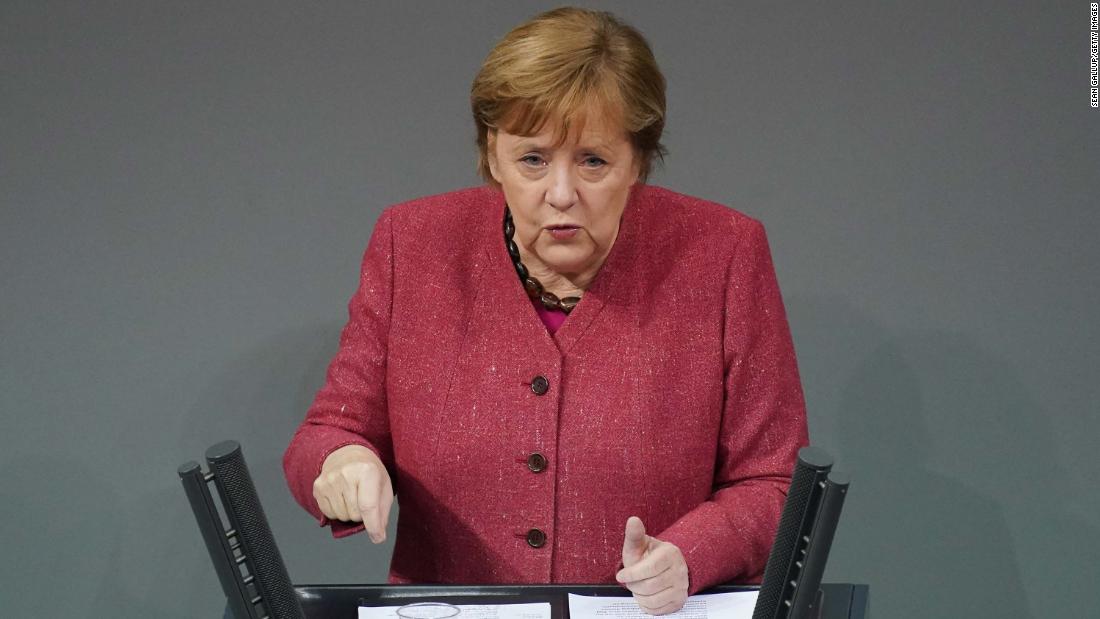 In a speech by the German parliament on Wednesday, Chancellor Angela Merkel warned that the national restrictions introduced on 2 November had not proved effective enough, with too many people dead or in intensive care at Covid-19 together.

A day after the country recorded a record 590 deaths, Merkel became emotional when she turned to her German counterparts to keep each other safe by reducing their social ties before the holidays, especially if they plan to visit older people.

“If we have too many relationships now before Christmas, and it will eventually be with our grandparents at Christmas, we will fail. We should not do that,” he told a budget session at the Bundestag.

The chancellor added that the number of dead per day was too high a price to keep some shops open, including waffle and mulled wine stalls that were very popular during the festive season. “We still have 14 days until Christmas and we have to do everything we can to prevent exponential growth again,” he said.

Merkel called on federal state leaders to start the Christmas holidays earlier, not on December 19, but on December 16, to help people limit their relationships and allow them to isolate themselves for longer before seeing older relatives. .

The chancellor would also like full lockouts to be applied for several days, possibly two weeks after Christmas, to reduce the rate of infection. But for that to happen, the leaders of all 16 states must be brought to his party.

As Europe’s second wave of coronavirus infection gathered steam during the fall, some European nations, such as France and England, have introduced national containment measures. However, German state and federal leaders agreed on lighter restrictions.

A nationwide partial lockout was introduced, which required the restaurant and bars to remain closed, but schools and shops remained open. People were asked to avoid travel, keep their contacts to a minimum, and limit public meetings to a maximum of five members from two different households.

These restrictions need to be eased during the Christmas period in much of the country, allowing people to meet in groups of up to 10 people, not counting children.

While some states, such as Bavaria, support stricter measures, others oppose it. Meanwhile, Germany is struggling to curb the growth of new infections and the mortality rate has continued to rise.

The country suffered the deadliest day of the pandemic on Tuesday, with 590 known deaths, the Robert Koch Institute (RKI) said on Wednesday. The previous record was 487 known deaths, reported on 2 December, according to the country’s disease and control agency, RKI.

The RKI also reported 20,815 new daily infections on Wednesday, about 3,500 more than the same day the previous week. The total value of Covid-19 infections in the country is currently 1,218,524.

At least 19,932 people died at Covid-19 in Germany, according to data from the Public Health Office. This figure is still much lower than that of other European nations such as the UK, France, Italy and Spain, reflecting Germany’s success in dealing with the first wave of epidemics.

In a Bundestag speech, Merkel said Germany found the second wave more demanding than the first, although the country “could see light at the end of the tunnel” thanks to advances in Covid-19 vaccines.

He called on state leaders to crack down on tougher measures, saying it was wrong for hotels to be open during the Christmas season, as this could create an incentive for relatives to travel overnight.

“I also think it’s right to close schools during this time, whether by extending the holidays to January 10 or in digital classes, anything else, but we need fewer connections,” Merkel said.

Germany’s leaders warned last month that if the country fails to curb growing infections, the health care system, accompanied by many, could collapse within weeks.

Health Minister Jens Spahn repeated this message in an interview with ARD TV on Tuesday: even if some no longer want to hear it. “

The head of the Interdisciplinary Agency for German Intensive Care Physicians (DIVI) on Wednesday urged people not to try to visit their loved ones during the holidays.

“At this moment, we all get together at Christmas and say it’s all going to be under control,” DIVI president Uwe Janssens said in an interview with CNN-affiliated N-TV. “Then seven days later your grandmother gets a high fever, another seven days later she’s transferred to the intensive care unit, and three more days later she may die. Maybe then your eyes will open, but unfortunately it’s too late.”

Several German states have already decided to tighten the restrictions in order to try to control the situation of the coronavirus.

The state of Saxony in southeastern Germany will go into what next officials call a “hard closure” next week, closing most shops and moving schools to online classrooms.

In Bavaria, where the number of coronavirus infections is highest, stricter blocking restrictions were also agreed on Tuesday. His governor, Markus Soeder, criticized the people who dragged the high death toll when he gave an emotional speech in Bavaria’s state parliament.

“I think it’s very confusing and extremely outrageous if the reaction is just a shrug. Deaths aren’t just statistics,” he said. “Of course we’re mostly older people, but we’re talking about our parents and grandparents. How can some people react so heartlessly and coldly when they talk about this topic?”

His remarks underlie skepticism in some parts of German society. There were a series of protests against the country’s anti-epidemic measures, with many protesters denying the severity of the virus.

CNN reported Frederik Pleitgen from Berlin and Stephanie Halasz from London, while Laura Smith-Spark from London.