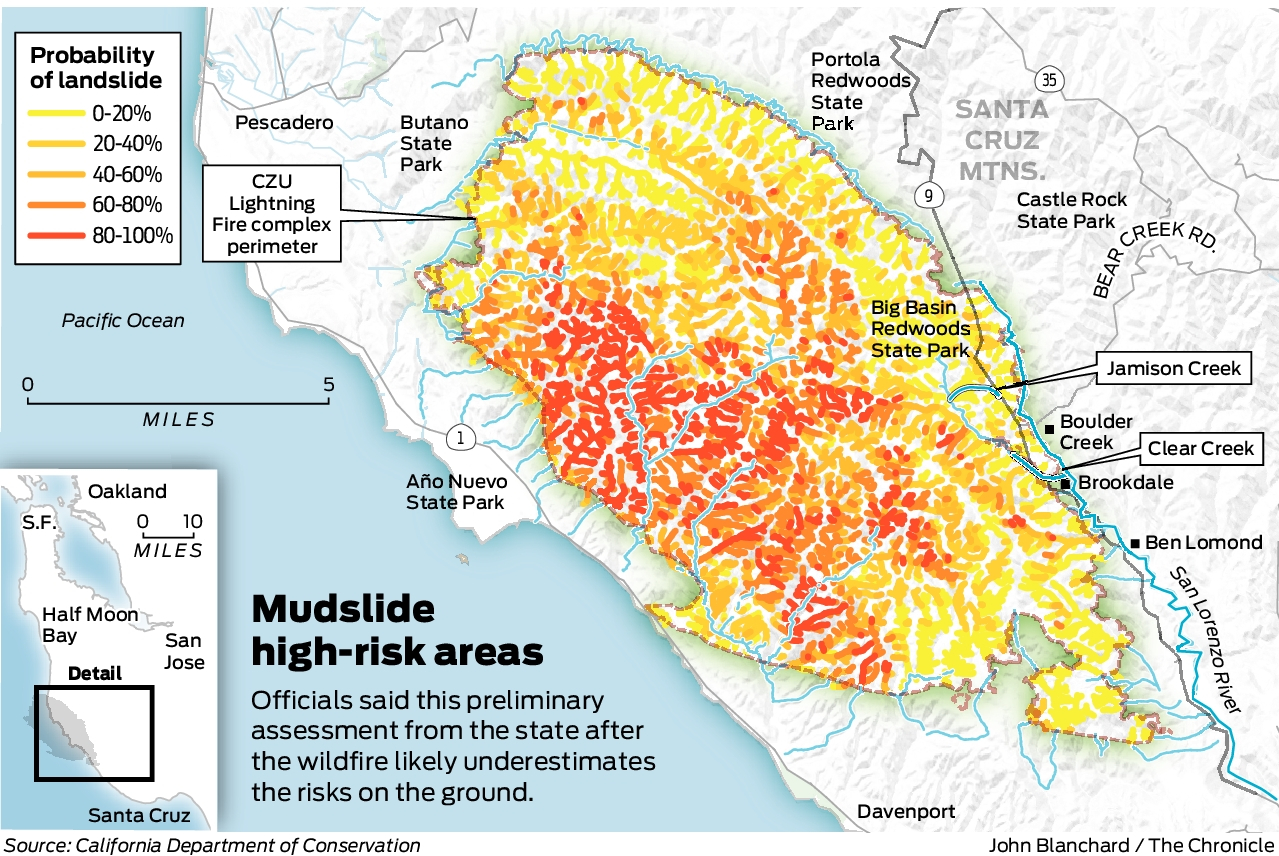 The Chronicle’s Live Updates page documents the latest events in the winter storm system that crashed into Northern California, including the Bay Area and Tahoe Lake.

23 hours Jack-knife big drill accident, small fuel leaks cause lanes to be closed at Bay Bridge: While wind and rain picked up in the bay area on Tuesday night, an accident with a large rig equipped with knives closed the three eastbound lanes of Bay Bridge shortly west of Treasure Island shortly after 10:30 p.m. California Highway Patrol officials said. Lanes 4 and 5 were still open for passing vehicles. CHP officials said it would take about an hour to clean up the site, which included a small fuel leak from the accident.

10:50 PM The weather service publishes flood advice in eastern Sonoma County: Bay Area Office of the National Meteorological Service issued one Urban and small stream flood advice for poor drainage areas in Eastern Sonoma County, which includes the city of Santa Rosa, city officials said. The consultant is scheduled to work until 2:15 a.m. Wednesday. City officials say moderate or heavy rains are causing urban and small stream flooding. “It has rained between 0.5 and 1 inch and more 1-2 inches of rain is expected in the area,” city officials said. “This additional rain will result in further minor flooding.”

20:18 Wind is getting stronger in the bay: Strong winds swept into Bay Area cities earlier than expected Tuesday night, meteorologists from the National Meteorological Service said. Speeds of 49 mph were observed in the Embarcadero in San Francisco and 36 mph in the Sunset District. Across the bay, windshield-shaking winds set off on the subsoil to more populated areas, with meteorologists reporting wind gusts of 41 mph / 32 mph / h in Oakland and 32 mph / h in Oakland.

19:38 Sonoma urges vigilance near burn scars: Sonoma County officials warned there could be devastating sludge spills near Kincade, Walbridge, Meyers and Glass Fire burn scars on Tuesday. Officials have not issued evacuation warnings since Tuesday night, but have encouraged county residents to keep their cell phones charged in the event of a rapid flood alert to these areas.

19:23 pm Wind signal takes effect: A wind warning warning from much of the National Meteorological Service’s ocean area came into effect on Tuesday night as forecasted high winds and heavy rains swept through the region. Wind speeds on the southern slopes are projected to reach up to 70 mph, warning meteorologists that power lines and trees could fall. The warning, which applies to San Francisco, the North Gulf, the peninsula coastline and the Santa Cruz Mountains, runs until 7 a.m. Wednesday.

19:16 San Jose will set up an evacuation site before possible floods: San Jose officials warned residents of the possibility of flooding on the Guadalupe River as heavy rains began on Tuesday. Homeowners in the Willow Street and Ross Creek areas of southwestern San Jose were encouraged to protect their properties with sandbags, move cars higher, and prepare for evacuation. Officials say an evacuation center has been set up at the Camden Community Center.

16:11 Monterey County orders another evacuation: County officials ordered an evacuation areas within the two-mile slope of Carmel and River Fire burn scars on Tuesday at 4 p.m.

15:10 Fast flood hour: Lightning floods will be available from Thursday due to possible debris flow in the East Bay Hills, North Bay, Santa Cruz and Santa Lucia Mountains, and along the San Mateo County Coast. Weather officials advised people to be careful about rapid water collection and monitor for steep terrain and landslides in steep terrain.

15:05 Some power outages may occur: Officials at Pacific Gas and Electric Co. said adverse weather conditions could result in weather-related power outages. Officials are on alert for sludge spills affecting areas affected by burn scars. But there were no planned power outages by Tuesday afternoon.

At 2 p.m., Bay Area residents prepare for possible landslides: Traumatized residents of the Santa Cruz Mountains, suffering from burns, are preparing for the first major storm of the season – either preparing to escape or facing blocked roads, drained power lines and, in the worst case, life-threatening landslides. There is a limit to the cost and COVID-19 where people can go as county shelters do not offer beds and the Red Cross offers cramped hotel rooms. Read the full story here.

13:26 Strong winds are expected to peak Tuesday night: The National Meteorological Service said Tuesday that a “very strong southerly wind” is expected to peak on Tuesday night, the night peak, in front of and with the atmospheric river. “The wind weakens significantly before Saturday morning, but remains breezy and windy” – NW Bay Area tweeted.

13:15 Monterey County orders an evacuation: It was ordered by the Monterey County Sheriff’s Office an evacuation within the burning scar of the Dolan Fire and in areas within a two-mile slope at 1 p.m. Tuesday. Areas burned by last season’s ferocious fires are vulnerable to severe mudslides.

11 hours Due to weather conditions, the only mass vaccination site for SF must be closed: The UCSF will close San Francisco’s only mass vaccination site for Tuesday afternoon for the rest of the week due to the wet and harsh weather ahead. Residents of San Francisco and UCSF patients 75 years of age and older were vaccinated at the site. The UCSF is rescheduling some visits Tuesday and the 250 scheduled for Wednesday, the spokesman said. There were no other meetings this week “because of a lack of vaccinations,” he said.

10:45, San Francisco is preparing for a storm, warns residents to prepare: San Francisco officials are preparing for heavy rain and wind this week. Some outdoor COVID-19 test sites in the Bay Area will close or reduce hours this week, officials said. “The first major winter storm of the season is here, and we are asking San Francisco residents to do their part by watching each other, being ready for their emergency care, and avoiding unnecessary travel,” Mayor London Breed said in a statement. Click here or call 3-1-1 to see if it affected the test site.