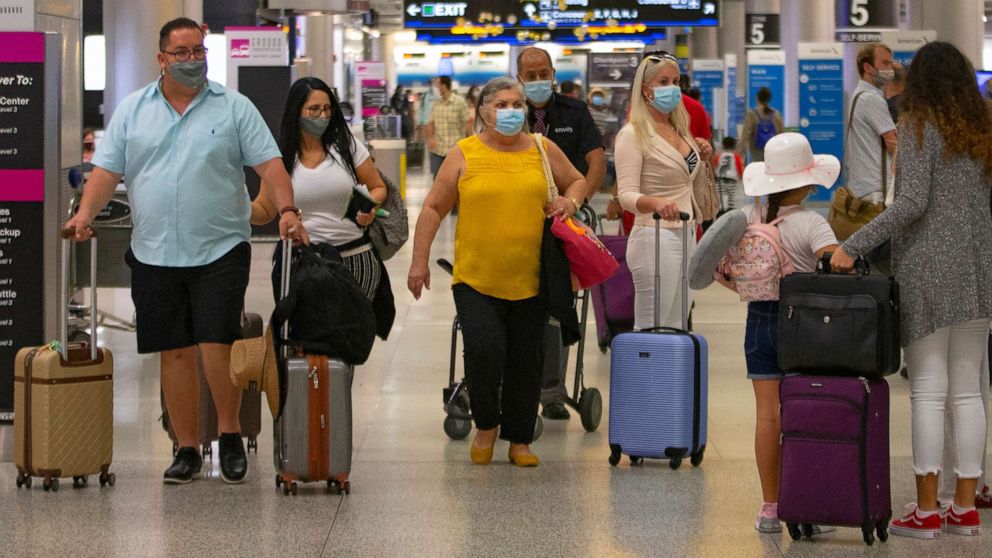 As Americans prepare for a likely non-traditional Thanksgiving, health experts and government officials are asking the public to heed their warnings not to travel and to avoid large gatherings and household shuffles as the country tries to look at what experts call the coronavirus “uncontrolled” spread.

“If we take part in trips and large indoor gatherings that we know are the driving forces behind transmission, we are expected to experience huge fluctuations beyond the already serious situation,” said Dr. John Brownstein, director of innovation at Boston Children’s Hospital and ABC Intelligence, warning that such a wave could result in a “humanitarian crisis.”

The holidays proved to be a catalyst for COVID-19 across the country. Earlier this year, after every summer break, the United States reported a significant infectious boom across the country, and experts say every element of Thanksgiving could be contained in a potentially deadly event.

Prior to May Memorial Day, the national seven-day average of new cases was around 21,000 new cases per day. Five weeks later, this average doubled, according to an ABC analysis compiled by the COVID Tracking Project.

A similar pattern occurred just over a month later after the fourth weekend in July. Less than three weeks after Independence Day, the average number of new cases increased by almost 40% and nearly 60,000 patients were hospitalized.

And after the summer wave began to subside, shortly after the Feast of Labor, new cases began to rise again, leading the country to its recent boom. As the weather cooled, public health experts, who had long warned of large gatherings, began to sound the alarm that even smaller gatherings — especially those indoors with poor ventilation — could lead to the transmission of COVID-19.

Since mid-September, the number of daily cases of coronavirus has increased by nearly 400%, and now the virus is significantly more prevalent than ever during the summer.

The national average for new cases per day is now more than 100,000 higher than in July and five times higher than at the time of the original April peak.

In November alone, the United States reported nearly 3.2 million COVID-19 cases, which is by far the worst month of daily cases, a quarter of all cases in the country.

All but one of the cases are growing in all states, Hawaii, while current hospital care is increasing in 48 states, Washington and Puerto Rico.

In the United States, daily deaths are over 30% from last week, with 10,617 deaths reported in the past seven days – about one death per minute.

In preparation for possible dropouts, the Centers for Disease Control and Prevention last week issued new guidance that strongly recommended postponing travel and staying home this year as “the best way to protect yourself and others.”

“The safest choice for Thanksgiving is to celebrate virtually or with the people you live with,” the CDC said.

“Travel, setting up the church, not wearing masks – it’s likely a wave will see a wave,” Fauci warned. “What we’re doing now will be reflected in two, three weeks.”

This message was echoed by national governors and local officials in order to keep him at home.

“We don’t really want to see Mom at Thanksgiving and bury her until Christmas,” Dr. Miss Horsi, president of the Mississippi State Medical Association, said in a virtual meeting last week.

“This year, if you love someone, it’s smarter and better to stay away – no matter how hard it is to say and hear,” New York Governor Andrew Cuomo said in a press release. “Because if I had to predict, you’ll see a significant spike after Thanksgiving.”

Massachusetts Governor Charlie Baker also advises residents to gather only with members of their own household.

“We encourage everyone to make a difficult choice for Thanksgiving,” Baker said at last week’s press conference. “We saw what happened in Canada when they held their Thanksgiving in October.

Seven Midwestern governors – five Democrats and two Republicans – teamed up in a Washington Post video and opinion article to send a bipartisan message urging precautions during the upcoming holiday.

“Think about your last Thanksgiving and the people around you,” they said. “Imagine their faces – laughing with you, watching football with you, or even arguing with you about politics. No matter how hard it becomes not to see them at this Thanksgiving, imagine how much harder it would be if their chairs were empty next year.”

“We need to make short-term sacrifices for our long-term health,” the video concluded.

Despite the warnings, millions are still traveling this holiday, with the Transport Safety Directorate last Sunday screening 1 million people for the second time since the pandemic began.

And although the role of indoor gatherings in viral infection cannot be fully quantified, experts stress that they contribute greatly to the spread of COVID-19.

“These gatherings take place in conditions that poorly adhere to social distance and camouflage, as well as suboptimal ventilation,” Brownstein said.

Experts also say that travelers who are tested before they leave for home do not mean they are protected.

“The confusion surrounding testing also means that many false negatives will give an unjustified sense of security to those asymptomatic cases or cases in the asymptomatic phase,” Brownstein said, adding that “due to the significant nationwide population mix, we expect hospitalizations to reach 100,000. and the number of deaths is close to 300,000 by the end of the year. “

But ultimately for millions of Americans, these COVID-19 numbers are not just statistics; represent family members and friends lost due to the virus who will miss this holiday.

“I understand the people behind the numbers,” Brandie Kopsas-Kingsley, ICU nurse at IU Health Indianapolis in India, told ABC News. “Every life and life was important. On Thanksgiving, it’s an empty chair. And we all have a big responsibility without quarantining, keeping safety, and visiting others.”