Facebook came back to Apple with the second critical newspaper ad 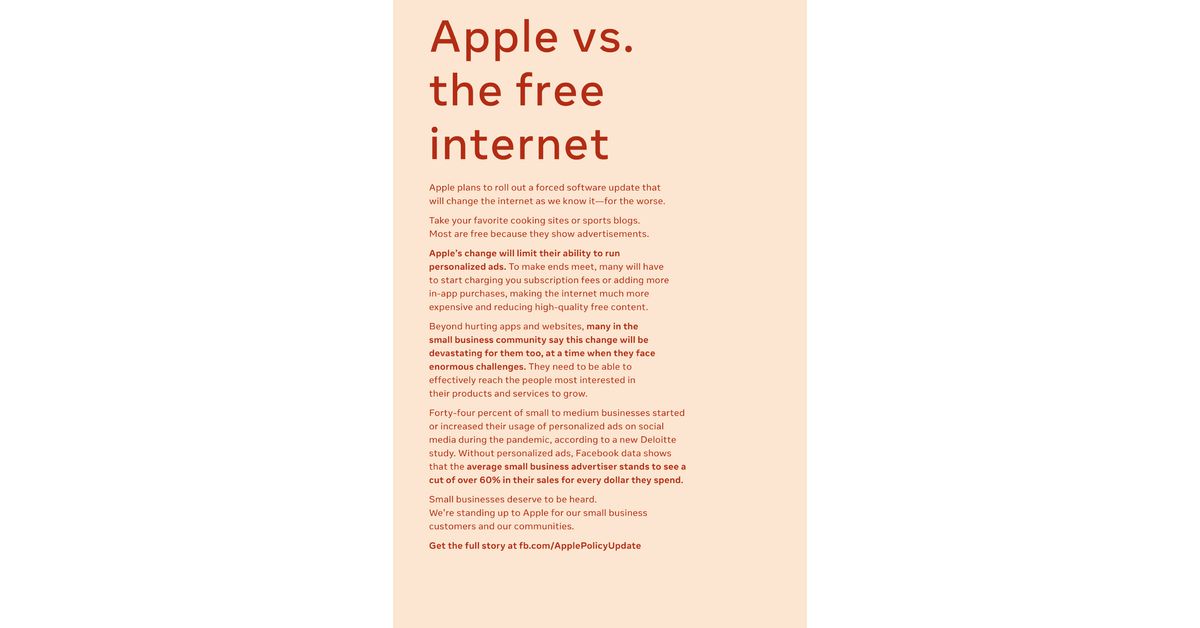 Facebook is stepping up Apple’s campaign against privacy changes today with a second full-page newspaper ad. This new ad claims that Apple’s iOS 14 privacy changes will “change the Internet as we know it” and force websites and blogs to “start charging subscriptions” or create in-app purchases for lack of personalized ads due to. A similar full – page newspaper ad follows A Wall Street Journal, New York Times, and the washington post office yesterday.

Apple plans early next year to modify iOS 14, which will require developers to ask permission to collect data and track users on mobile apps and websites on an iPhone or iPad device. Apple has revealed how iOS 14 users will be encouraged to choose to track apps this week, noting that developers like Facebook can explain to users why they allow tracking.

These changes will impact Facebook’s lucrative advertising business, but the social networking giant is shaping them into much bigger things that could impact small businesses. Not surprisingly, Apple disagrees. “We think it’s a simple matter to stand up for our users,” an Apple spokesman said in response to Facebook’s first full-page newspaper ad yesterday. “Users need to know when they collect and share their data in other apps and websites – and they have to choose whether to allow it or not.”

Facebook is clearly not holding back its PR campaign, with this latest newspaper ad trying to convince readers that Apple’s changes are more about porting websites and apps to a paid model, where Apple benefits from in-app purchases and subscriptions. With full page ads A Wall Street Journal, New York Times, and the washington post office, Facebook is also very clearly trying to persuade regulators (i.e. people who are still reading paper newspapers) to watch Apple’s privacy changes.