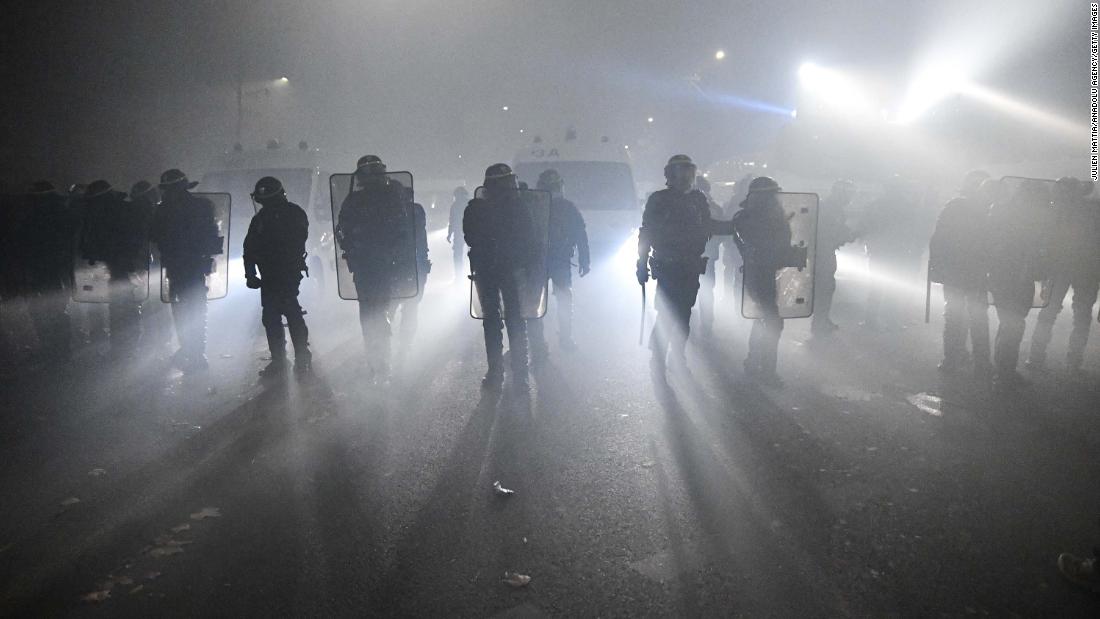 The most controversial section of the Global Security Act – Article 24 – which was approved by lawmakers on Friday, prohibits the publication of images that allow a law enforcement officer to be identified “with intent to cause physical or mental harm”.

The bill, which has been the subject of much criticism and several protests, has been amended by the government, according to lawmakers, to ensure freedom of the press.

Now that the bill has been passed by Parliament, it will turn to the Senate in December.

Prime Minister Jean Castex said in a statement before Tuesday’s vote that the new law could not “harm the legitimate interest of the public in informing”.

But the amendment was not enough for veteran journalist Claire Hedon, who was appointed French human rights defender earlier this year.

Speaking on French television after the vote on Article 24, Hedon called the amendment a step in the right direction, but warned that “in our legislative arsenal we already have the option of punishing anyone who misuses videos they post.”

There were several protests against the bill on Saturday, with an estimated 22,000 people taking part in marches across France. In Paris, the crowd included members of the media, some gilets jaunes (yellow vests) protesters and members of the Extinction Rebellion.

Overall, a global security bill would extend the ability of security forces to shoot citizens through police bodies and drones without their consent, while restricting the publication of photographs or videos of police faces.

According to Amnesty International, if the bill becomes law in its current form, France – one of the first countries in the world to promote the concept of universal human rights – will become exceptional among democracies.

“If people can’t film anything on the street when the police sometimes use illegal violence, a very worrying message should be sent,” said Cecile Coudriou, president of Amnesty International France.

Proponents of the bill say this is necessary after police officers were segregated and harassed on social media during the 2018 and 2019 gilets jaunes protests. It is also said that nothing in the bill will prevent journalists from doing their job, as criminal proceedings will show “harmful intent”.

But Reporters Without Borders said this provision is too vague. “Intention is a concept that is open to interpretation and difficult to define,” the organization said in a statement.

In parliament, the bill is being pushed by two lawmakers from President La République en Marche, President Emmanuel Macron. One of them, Jean-Michel Fauvergue, the former head of the police counter-terrorism unit, told parliament this week: “Article 24 aims to ban their exposure and harassment of malicious and dangerous people on social networks. No need to worry: Journalists will continue to be able to do their job . “

Another supporter of the bill, Alice Thourot, told CNN: “Photographs, whether broadcast by citizens or by citizens over the phone, will continue to be possible. ”

And they fear that the bill has already incited the police during the protests.

Last Tuesday, when the debate began in Parliament, protesters gathered in the building to protest against Article 24. Thirty-three protesters were taken for questioning, mainly on the grounds that they could not disperse on police instructions.

At a press conference on Wednesday, French Interior Minister Gerald Darmanin was asked about the police response to the protests, as well as a video from a journalist who claims police have threatened to arrest him despite presenting his press card.

“The journalist did not contact the police before the protest, as some of his colleagues did, to report on it,” Darmanin said. There is nothing in French law that requires journalists to seek police permission before making a protest.

On Monday night, the interior minister himself responded shortly after the dismantling of the migrant camp in Paris, saying some of the pictures were shocking.

Pictures and videos posted online showed police apparently chasing people through the streets and striking journalists with both police sticks and tear gas. Darmanin tweeted that he demanded a detailed report on the case, adding, “As soon as I get it, I’ll make decisions.”

But beyond the work of journalists, they also fear what the bill means to the public and what they can grab with their phones.

As Coudriou explains, “France has recently experienced so much police brutality that has been exposed through exactly things that would now become illegal. Amnesty International used many of these videos after checking their authenticity. These show that some police officers are a source of brutality. may occur despite a denial strategy. ”

Earlier this year, Cédric Chouviat, a 42-year-old North African-born father, died shortly after police stopped him near the Eiffel Tower. During the stop picked up by several passing motorists, Chouvia was captured by three police officers; he died two days later in a hospital and had his larynx ruptured at autopsy, according to the prosecutor in the case.

After several months and an initial denial of possible irregularities by the police, the amateur recordings led in part to the launch of a criminal investigation into the actions of the officers concerned. Three officers are now charged with manslaughter. They all deny the violation

“I would say we won’t allow the police to shoot after George Floyd,” said David Dufresne, who said his latest film on police brutality, “Monopoly of Violence” simply couldn’t have been made if the Global Security Act was a law.

“In France, we have a similar case: Cédric Chouviat,” Dufresne told CNN. “People who pass by and see that there is a police check that looks like it’s bad. No one knows what happens next, which is the death of this man. When they start filming, it’s because they understand that they must. ”