In what moral universe does Biden require a Catholic task force when Trump received a free passport? 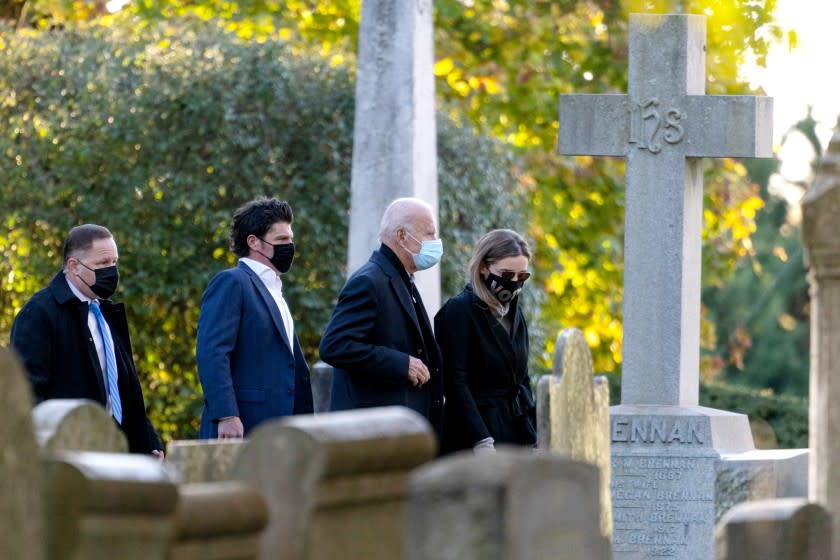 The election of a second Roman Catholic as president of the United States should be a great celebration among the coreligonists. Of course, not all Catholics supported Joseph Biden, although about half did. On November 7, the President of the Conference of American Catholic Bishops, José Gomez, the Archbishop of Los Angeles congratulated Biden and Kamala Harris, and five days later Pope Francis. Then last week, Gomez wasn’t so sure. On Tuesday, at the end of a nationwide meeting of U.S. bishops, he stated that the election president’s support for abortion is a “difficult and complex situation” for the church.

According to the news, bishops may deny Biden, a lifelong Catholic, access to the sacrament of Holy Communion, much in the same way that conservative bishops declared John Kerry, the Democratic presidential candidate in 2004, undesirable in their dioceses on the sacrament railroad. Gomez has set up a working group to consider the matter. No one yet calls this a threat of excommunication, but bishops are considering it.

Back in 2016, the same U.S. Catholic Episcopal Conference congratulated Donald Trump on his presidential victory, even before the results were confirmed. This year, at least one member of the conference, Joseph Strickland, Bishop of Tyler, Texas, refused to recognize Bident as president-elect after the competition was invited.

To pretend that anything between Joe Biden and Donald Trump is approaching moral equivalence, let alone deciding the case in Trump’s favor, is a shocking omission of ethical judgment.

President Trump separated the refugee children from their parents without remorse and imprisoned them; more than 22,000 times during his presidency; and used his office to advance his political, economic and legal interests. Arguably, it all came after the bishops offered their post-election congratulations in 2016, but Trump’s life up to that point – full of divorces and extramarital affairs, forced workers to sue for their rightful pay, and a nasty, racial – bait campaign – predicted the whole.

In what moral universe does Joe Biden, a devoted Roman Catholic, civil servant, and family man, present bishops with difficulties and intricacies as Trump lets him through? Although bishops and many Americans may not agree with his position, Biden’s position on abortion is hardly unprincipled. It rests on constitutional values ​​and the law of the land, Amendment 1 and the separation of church and state, on the belief that the choice to terminate a pregnancy should be made by a woman, not the state.

Maybe we should take away the prospects of the American Catholic hierarchy trying to bend Joe Biden toward absolutist anti-abortion rights – that position, according to the Pew Research Center, does not share the majority of Catholics or the majority of Americans. I am concerned that the attempt to distrust Biden is an attempt to reaffirm the “great medieval synthesis” as it sought to raise the Vatican’s claims of priority above all other authorizations of time.

The best historical example is the so-called Investiture debate, when in 1077 VII. Pope Gregory IV. Emperor Henry of St. Rome knelt outside for three days, kneeling in the snow, waiting for a papal blessing.

Another example is the treatment of the church in a crisis of pedophilia. A day before Pope Francis called Biden, the Vatican published a report in which II. Pope John Paul entices him because he ignored information about the sins of former Cardinal Theodore McCarrick when he raised McCarrick to church. Again and again II. During the papacy of John Paul, as well as his successor, XVI. Benedict argued in the Vatican that the church could provide for the investigation and punishment of abuses internally, without the intervention of civil authorities.

How did it work?

The era of the great medieval synthesis is long gone. Catholic bishops have every right to provide moral guidance to believers – although their moral authority is damaged in the face of the pedophilia crisis and Trump’s tacit support. But they should think twice about trying to intimidate a Catholic civil servant by threatening to withhold Christian sacraments.

Most recently, Trump ventured near a public church with a cleaned photo option in front of St. John’s Episcopal Church in Lafayette Square in front of the White House. He held up the Bible as if he were selling a box of detergent. As for Biden, he began election day with Mass at St. Joseph, Brandywine, his parish parish, Wilmington, Del., Where his first wife, daughter, and son are buried. Biden called him back to the bench the following Sunday, the day after the election.

Trump was on the golf course.

Catholic bishops should acknowledge that the election of a reverent Roman Catholic president is an occasion of celebration, not retaliation.

Bishop Randall Balmer teaches at Dartmouth College. His latest book, “Solemn Respect: The Separation of Church and State in American Life,” is scheduled to be published in February.

This story originally appeared in the Los Angeles Times.