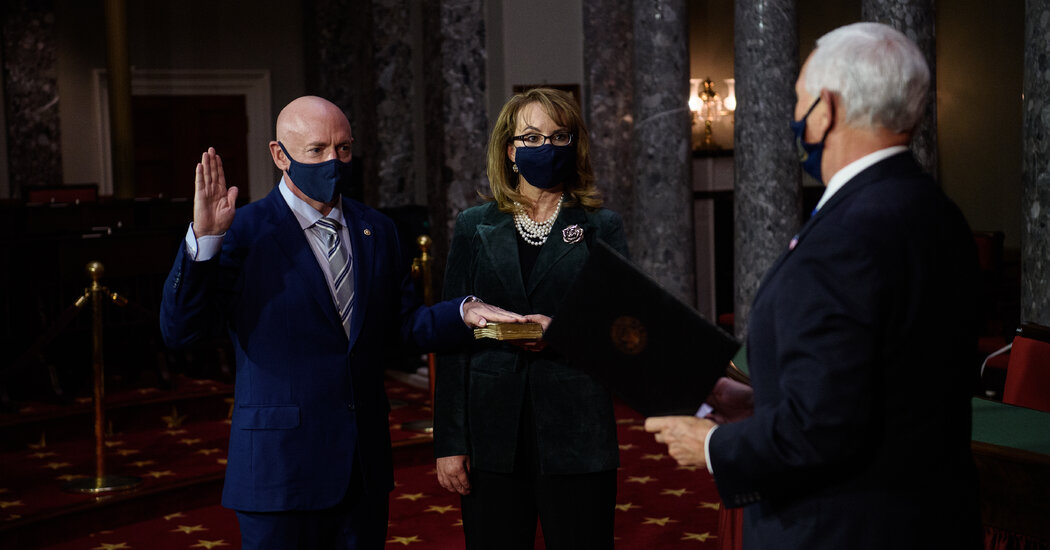 Ms. Giffords accompanied Mr. Kelly on Wednesday, standing and quietly applauding from the gallery as Vice President Mike Pence swore and gestured to the benefactors.

In Arizona, Mr. Kelly found the wind on the edge, facing Republican Senator Martha McSally’s weakened candidate and a rapidly changing state where women, younger voters, and Latinos became an increasingly powerful part of the electorate. Ms. McSally lost her Senate offer in 2018 after committing to President Trump to then be appointed to a different position and stick to the same playbook in 2020.

Following the campaign, Mr. Kelly leaned hard on his biography as a former naval captain and astronaut, picking up the mantra:full speed forward. She was a convincing surrogate mother to Ms. Giffords, who spoke in a personal sense about her commitment to both her homeland and the woman, and gestured in an ad about how she “helped me through my darkest moments”.

Mr. Kelly soon emerged as a fundraising juggler, breaking state and national records by tapping into his own network and listing the small dollar donors who were enlivened by Mr. Kelly’s dynamic biography and determined to overthrow the Senate.

“As Mark likes to say, his wife, Gabby, was already a member of the family at Congress, but the tragedy upset both of their lives and changed so many of their plans,” New York Senator Chuck Schumer said on Wednesday. “Everyone continues to be inspired by Gabby’s recovery, Mark’s dedication and the courage it took for their family to re-enter public life and public service.”

As a candidate, Mr. Kelly took a pretty cautious figure and was firmly away from issues nuanced by controversy, working laser-like to promote bilateralism and health reform. He spoke openly and often about Mr. McCain’s admiration for his naval fellow, citing the widely acclaimed Arizonaan as a blueprint for the legislative plan he wanted to become.

He will be working in Mr. McCain’s old office, and on Tuesday, the day before the oath, Mr. Kelly and his family visited the senator’s grave at the U.S. Navy Cemetery in Annapolis.