Several brush fires near the homeless camp on Highway 101, Goleta 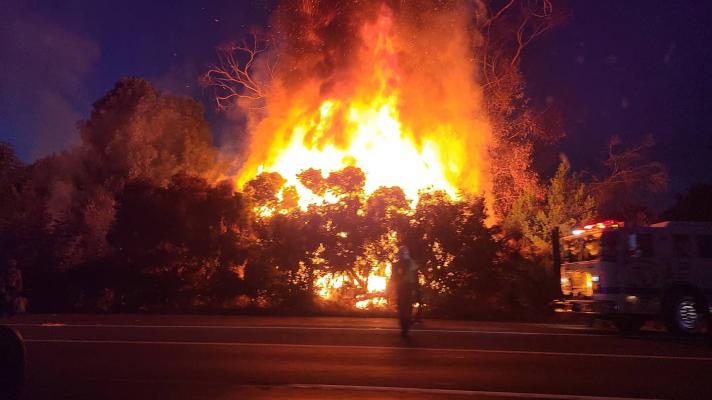 Local firefighters responded to a large brush fire on Goleta Highway 101, near nearby homeless camps.

There have been several reports that the fire occurred near a homeless camp, although this has not yet been officially confirmed, Bertucelli said.

The first arriving crew found a heavy fire between the motorway and Calle Real and an aggressive attack was carried out from the south, the arriving crew attacked from the north. Significant progress has been made in protecting buildings in the area, Bertucelli said.

The fire was destroyed, and progress stopped when, about 30 to 45 minutes later, a second fire erupted 100 to 200 meters on the highway.

The second fire began to burn intensely, causing a stain on the south side of the highway and causing light spots. They asked for more help, Bertucelli said.

It is not clear how this second fire began.

There was a woman who was transported with injuries to Santa Barbara Cottage Hospital. Scanner traffic has reported burns, but this has yet to be confirmed.

Firefighters will remain on site throughout the evening and morning, as traffic restrictions may remain in place until Saturday morning.

Between Veg Fire, Hwy 101 NB Patterson and Fairview. Goleta. SBC on site with green response. Fire between Calle Real and the motorway. homeless enc. in the area. Traffic restrictions on 101. The inv. There are no reports of damaged structures. Call the Newsline. Call the Newsline #realInc pic.twitter.com/rFgMH5cPcx

#RealInc UPDATED video. This is the video from the 2nd flare-up. Since then, fire activity has decreased significantly. Staff will remain on site for several hours, ensuring a full mop. pic.twitter.com/y9PvEgCmkR

The Santa Barbara County Fire is at the scene of a vegetation fire on Hwy 101, north of 217. More trees are burning.

Posted by Julia A.

Posted by Jessica B.

My husband was riding a bike and was able to get some pictures.

Highway fire as seen from the UCSB campus.

Photos of the Calle Real fire.

Here are my photos of the fire along Highway 101 around 5pm from UCSB near the Mosher Alumni House.

I played music on Isla Vista Bluffs and saw this scene:

At first I thought there was a fire in Isla Vista. But when I rode my bike on Isla Vista, it stayed far away. I headed to the UCSB near the Mosher Alumni House to get a clearer panorama.

Along the way, I met a cyclist coming in another direction who said he was along Highway 101 near Kellogg.

Here are some of my photos from UCSB. In the foreground you can see the smoke from the airport and the fire behind it.

Here you have a wide view of the almost full moon in the upper right corner.

It shows a little more of the smoke from the sky.

And here are some closer shots of the airport terminal with smoke rising behind it.