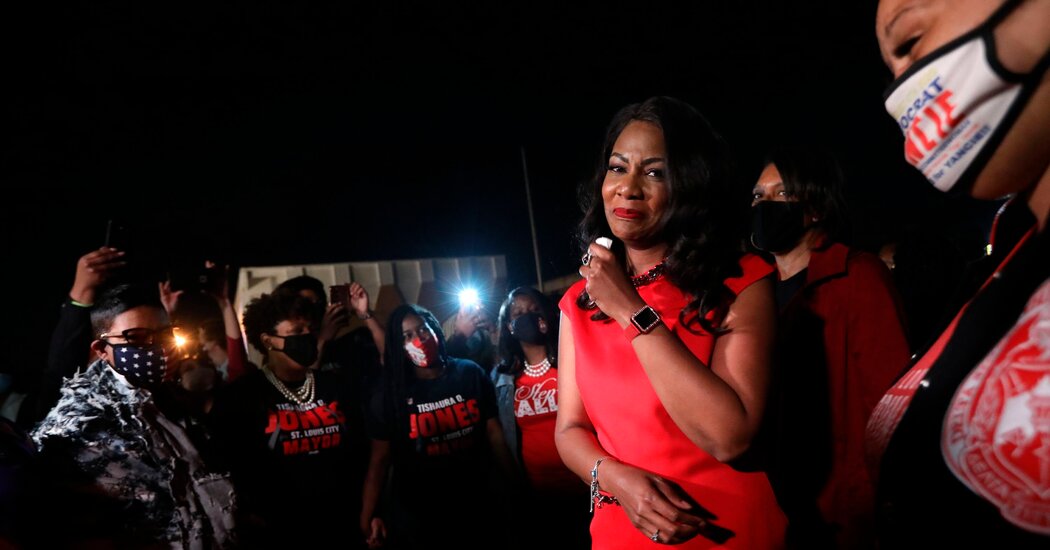 Tishaura Jones became the first black woman to be elected mayor of St. Louis on Tuesday and will take over running the city later this month, with high homicide rates, disruptions in the city jail and challenges related to the coronavirus epidemic.

Ms. Jones, the city’s treasurer, received about 52 percent of the vote over her opponent, alderwoman Cara Spencer, who had nearly 48 percent, according to unofficial results posted on the city’s website. Ms. Jones will take an oath on April 20th.

Ms. Jones, a Democrat, said she chose the post of mayor in part because she raised a 13-year-old son in northern St. Louis. A gun was pulled on him once as he crossed the street to his grandfather’s house, he said, adding that, like many black parents, he had “discussed” with him how to behave when meeting with police.

“I’m taking a lens to raise a black child in this city,” he said, adding, “I want the kids to feel safe.”

Ms. Spencer, also a Democrat, agreed on Tuesday night and later congratulated Ms. Jones On Twitter, saying, “You have my support in making St. Louis the big city we know it could be.”

This was the first mayoral election during the city’s new election law reform, called the D-proposal. It requires candidates to run without party candidates, and the two candidates with the most votes in the March pre-election will face each other in a general run-off election. next month.

Ms Jones said she wanted to improve urban services, especially for those living north of Delmar Boulevard, which divides the city on a racial and socio-economic line. He said the division has contributed to the poor performance of health, education and income for people living north of Delmar, most of whom are black.

“On a separate side of the street, you can immediately notice the difference in investment,” he said. “No matter where you live, you still have to get the same services.”

In Tuesday night’s victory speech, Ms. Jones promised not to hesitate to confront racism, homophobia, transphobia, xenophobia, or religious intolerance, adding, “I will not remain silent if I notice any injustice.”

Among his biggest challenges in the interview, he said he has tough conversations with progressive white residents about what it means to be an ally for black people and to make them silent when black people talk about racism, which was a driving topic. in the mayoral race.

“Our biggest challenge is that we don’t want to tell the truth,” Ms. Jones said, “and the truth can be ugly sometimes.”

Ms. Jones, a graduate of Hampton University, Saint Louis University School of Public Health, and Harvard University’s Kennedy Government School, has spent the past 20 years as a civil servant. In 2002, he was appointed a member of the city’s eighth department of the Democratic Committee. He has spent two terms in the Missouri House of Representatives, having been the city’s treasurer since 2013, according to his campaign website. In 2017, he failed to become mayor of St. Louis.

Ms. Jones will replace Lyda Krewson, the first woman to serve as mayor of the city, who stated last fall that she did not want to seek a second term.

Ms. Krewson congratulated Mrs. Jones On Twitter. “I’m a fan of your success,” he said. “My administration and I are ready to make this transition as smooth as possible.”

The city jail has also seen more disorder in recent months, and on Sunday detainees broke windows, set fire to objects, and threw objects into the street below. A similar episode took place in February.

Ms. Jones said she believes in a police model that leads to prevention rather than arrest and imprisonment, including the employment of social workers for a few calls.

In a conversation with his son, he said he had asked about the mayor’s duties and how the mayor could help the Police Headquarters work. “Well, good, that means I’ll be safe,” she recalled.

“He was hit by a lot of bricks,” he said. – You shouldn’t have felt that way. It just made me reshape and rethink public safety. “

Ms. Jones also campaigned for improving the city’s response to the epidemic, as well as policies to improve public health infrastructure. Under his leadership, mobile and stationary vaccination clinics would also be established, he said. St. Louis has an average of about 36 positive cases a day, and about 14 percent of St. Louis residents have been fully vaccinated, according to a New York Times database.

With more than $ 500 million promised to the city under the U.S. Rescue Plan Act, Ms. Jones also promised help for small businesses as well as those in need of rental and mortgage assistance.

“It’s time for St. Louis to prosper,” Ms. Jones said in her speech. “It’s time to get some fresh air around.”