The 50-year-old man is run over and killed by THREE collided drivers as he tries to cross the street in south Los Angeles.

Posted by Rachel Sharp on Dailymail.com

Over the weekend, crossing a street in southern Los Angeles, a 50-year-old man was hit and killed by three separate striking drivers.

Jose Fuentes passed through the intersection of 78th Street and Central Avenue in the neighborhood of Florence on Sunday night when he was struck by three separate vehicles and each fled the scene while dying on the road.

The LAPD has published graphic footage of fatal collisions and is asking the public to help locate drivers.

Fifty-year-old Jose Fuentes was hit and killed by three separately collided drivers while crossing a street in south Los Angeles over the weekend.

Fuentes crossed the road at around 7:39 p.m. when the motorcycle heading north plowed it according to the LAPD.

The biker failed to stop and ran off the scene.

Moments later, Fuentest was hit by another vehicle – a white sedan – that also drove off, and then hit by a third vehicle that didn’t stop again.

The 50-year-old man died at the scene.

The cyclist fell a short distance from his bike along the road after the collision. 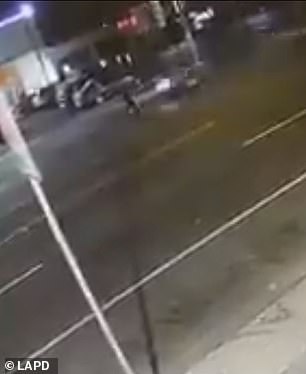 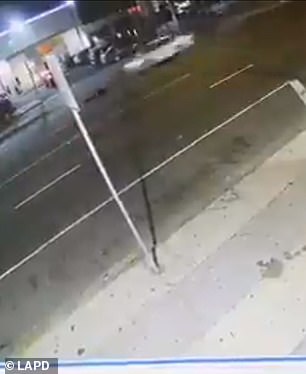 Fuentes passed through the intersection of 78th Street and Central Avenue in the neighborhood of Florence on Sunday night when he was hit by three separate vehicles. Pictured is the moment the bike strikes (left) and the sedan (right)

A separate shot from a different angle shows the cyclist picking up his bike and clinging back to the deck before pulling away from the scene.

Police are searching for all three drivers in Fuentes’ death.

They said the first man was a dark-colored sports engine.

The second was driving a white sedan, but police did not provide further details.

No details were provided for the third vehicle or driver, ABC7 reported. 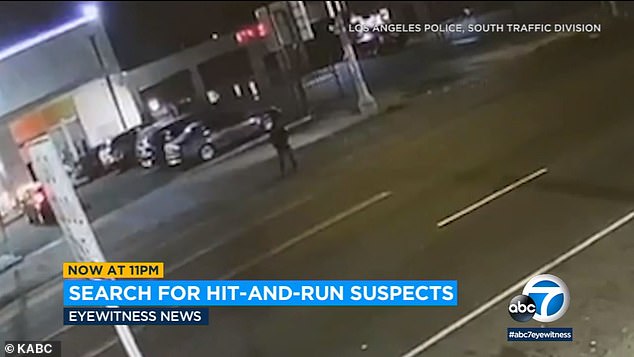 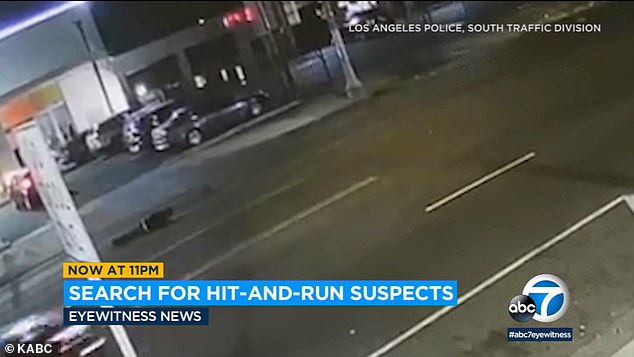 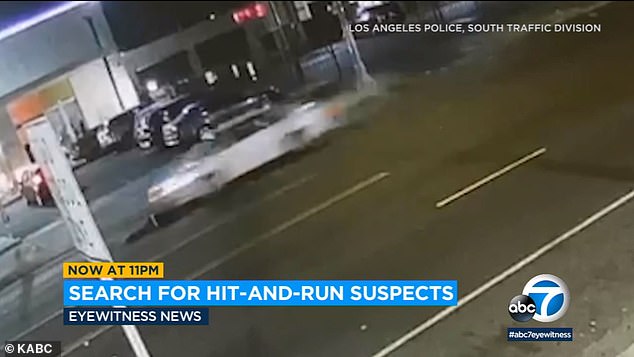 The white sedan then hits when it is on the road. It also drives away

“No one stopped and didn’t help Mr. Fuentes when he lied,” Moreno said at a news conference.

“The biker guy could have easily gone out on the street, possibly stopping and blocking traffic, and preventing a second or third collision.

“But he decided to get on his motorcycle and took off and left the scene.

The LAPD asks anyone with information about Fuentes ’death to contact the Southern Traffic Department.

A separate shot from a different angle shows the cyclist picking up his bike and clinging back to the deck before pulling away from the scene.