Yes, the 2020 Atlantic hurricane season was bad – but was it really that bad? 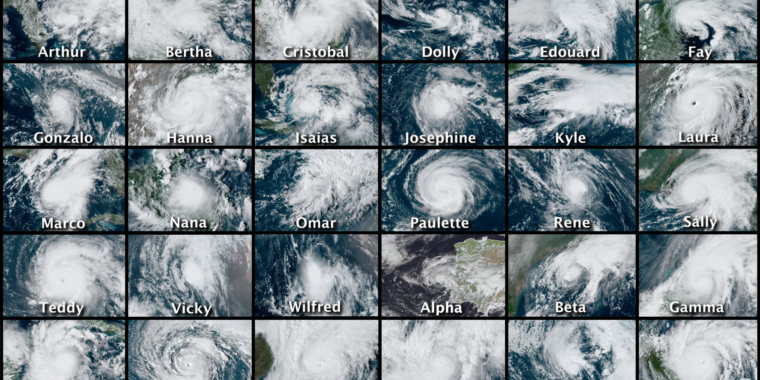 Monday was the last “official” day of the Atlantic hurricane season, pulling the curtain off the ferocious year of storms in the Atlantic Ocean, the Gulf of Mexico, and the Caribbean.

The top numbers are staggering: there were a total of 30 tropical storms and hurricanes, surpassing the previous 28 records in 2005. Forecasters at the Miami National Hurricane Center in Miami ran out of names for the second time and had to resort to using the Greek alphabet.

Twelve of these storms landed in the United States, destroying the previous record of nine coastal tropical storms or hurricanes recorded in 1916. There were only five landings in Louisiana. At least part of the state has been subject to Coast Guard or tropical activity warnings for a total of 474 hours this summer and fall. And Laura is the strongest hurricane that has landed in the Pelican State since 1856.

Not all records have been broken

To some extent, however, this season was not so extraordinary. Perhaps the best measure of the overall activity of the season is not the number of storms named, but rather the “accumulated cyclone energy,” i.e., ACE, which summarizes the intensity and duration of storms. So a weak, short-lived tropical storm matters almost nothing, while a large, long-lived hurricane quickly gathers dozens of points.

The ACE for the 2020 season in the Atlantic has been 179.8 so far – and there may still be a weak tropical or subtropical storm. This is significantly higher than the climatological norm for ACE values ​​(about 104), but this does not quite result in a record for the 10 busiest Atlantic seasons, which are accelerated by the 1933 and 2005 seasons.

In terms of estimated damage, this season is far from a record. So far, the damage is estimated at $ 37 billion across the Atlantic. This is significantly less than the devastating 2017 season that included Hurricanes Harvey and Irma, causing a total of more than $ 300 billion in damage. Less than 2005, in which there were Katrina, Rita, Wilma and other storms, in excess of $ 200 billion. One factor in 2020 was that most of the biggest storms left heavily populated areas.

In addition, the hyperactive Atlantic Basin stands out among other basins where there is typically tropical activity, including the Northeast and Northwest Pacific, which were much quieter than usual this year. Overall, by 2020, the value of ACE in the Northern Hemisphere will be about 20 percent below normal levels in a calendar year.

Perhaps the greatest legacy of this Atlantic hurricane season is the disturbing trend of tropical storms, which is rapidly evolving into strong hurricanes. This “rapid intensity” occurs when the maximum sustained wind of the storm increases by 35 km / h or more in 24 hours and was observed in 10 storms this year.

In addition, three late season storms – Delta, Eta and Iota – increased its speed by 100 miles per hour in 36 hours or less. The Iota that crashed into Nicaragua on November 17 was the latest Category 5 hurricane recorded in the Atlantic Ocean.

Some recent studies, including a study published by Nature Communications in 2019, found that climate change has intensified. In the case of the strongest storms, the study observed that during the 24-hour period, the increase in intensity increased by about 3 miles / hour per decade between 1982 and 2009. time and information to make vital preparations and evacuation.